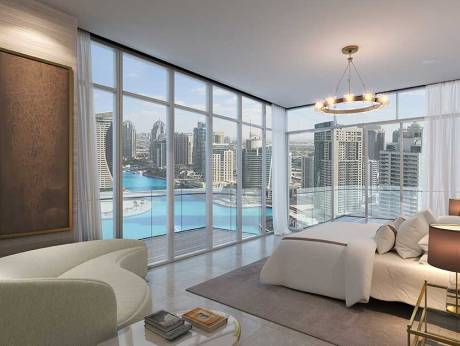 Emaar went for such a location with a twin-tower release its “Beachfront” development, and now L-I-V Developers has launched sales at its first tower project, which are on the Dubai Marina waterfront.

And it seems that investors are willing to come on board. Emaar issued a statement that it generated sales interest of Dh1 billion from selling out the 375 units on offer.

Clearly, Dubai’s developers and its property buyers are picking up on the same sentiments that was on show right through 2017. And VAT has not dented sentiments in the residential off-plan space. At least based on what has been on show so far.

L-I-V Developers has been around in the market for some time, primarily through acquiring plots and developing Dh20 million plus villas at Emirates Hills. The Dubai Marina plot was bought in 2015 and construction started in Q3-16. (The company also had some development interests in the US, principally in New York, Los Angeles and Orange County.) . The second project could be by the middle of this year.

More options are coming up across the length and breadth of Dubai’s waterfront locations — Meraas has multiple island options such as Bluewaters and Nikki Beach, the Palm with its Raffles-branded twin-tower on the Palm, Dubai Properties with 1/JBR, and Emaar with the Beachfront and its other twin-tower project — for an Address hotel — at Jumeirah Beach Walk.

And that’s only along the Jumeirah coastline. Further down and in and around the Dubai Creek Canal, developers are lining up their latest high-end living options.

The real estate action by Dubai’s waterside is going to flow for some time to come.